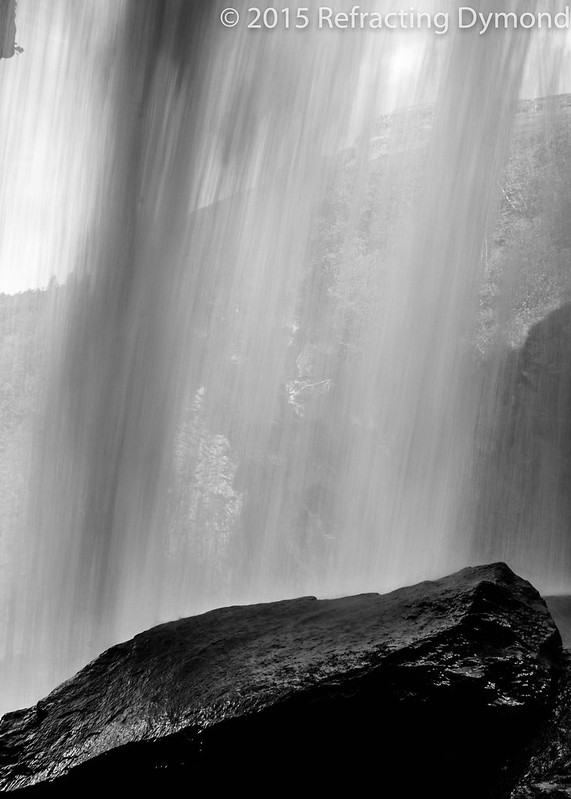 Looking at the next few photos I want to post, I noticed that many were in black and white. So I thought I would group them together in a theme “week”. It will actually be more like a number of posts over two weeks, but that doesn’t matter.

There are not many places where you can actually go behind a large waterfall. On a hike in Norway in the summer of 2015, we passed by Storseterfossen. The waterfall, located near Geiranger, is about 30 m high and can be reached by steep but short hike. The view from behind the waterfall is quite different. The sound echoes, the rocks are moist and mossy, and you appreciate the waterfall not by looking at its size cascading over the mountain, but rather by feeling and hearing it.

Waterfalls are always a challenge to photograph. I didn’t have much equipment with me while hiking, and I wouldn’t have had many places to set it up. To get the blur, I closed the aperture as far as possible and propped my arms on rocks to try and keep the camera as steady as possible. I would have liked to been able to do a longer exposure, but given I had no equipment and was trying to keep the camera dry, I was happy with what I did. The end result has almost an abstract look to it, which I like. I love waterfalls, and am glad I had the opportunity to go behind this one.