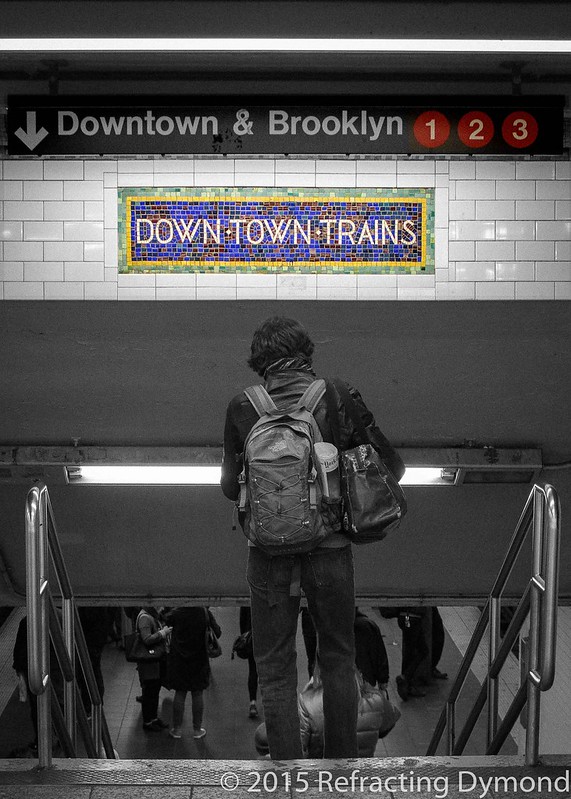 I find the subway an interesting place. Never a place I want to stay for long, but it is interesting. A city under the city. The impatience of people waiting for a train, trying to get somewhere. The nervousness of suburban folk when encountering a homeless person. Subway musicians, employees, police, criminals, tourists. It’s a real mix of people. So much interesting material, but I had never tried to capture it.

Originally I had intended on just taking a picture of the “Downtown Trains” sign with the empty staircase. The well-designed NYC subway signs are often photographed and even have had their own book published. I thought it would be neat to capture the sign at a subway station so busy while it looked empty. Well Grand Central Station subway stop is very busy and people kept coming into my shot. I then reminded myself not to be afraid of people in shots, it brings life into the photograph. The guy was the first person to step into the photo once I decided to include people. He was moving, but I like the way it looks like he is standing still. The picture is centered around him. I chose to convert the shot to B&W and highlight the signs in color. Not everyone is a fan of this effect, but I really like it in certain cases. This makes your eye go to the signs, which were my original main subject of the photo. By keeping the signs in color they remain the main subject and the person is moved to blend in with the rest. I wonder where downtown he was going?