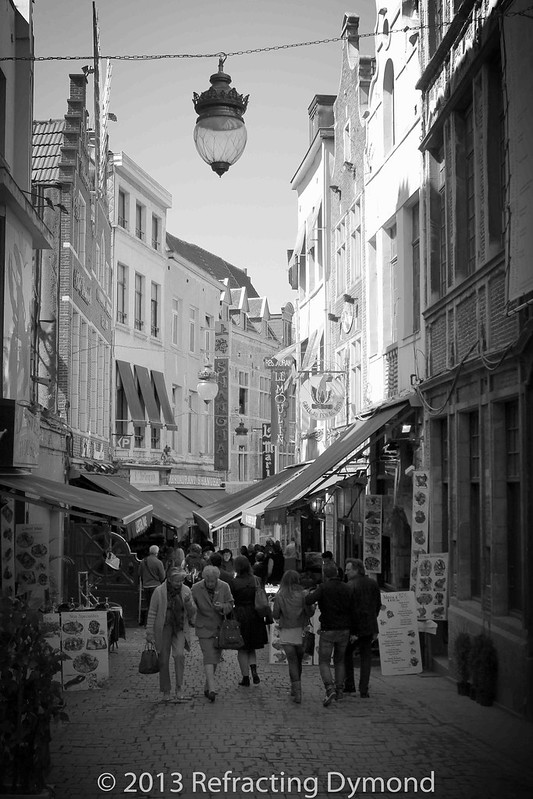 I find it incredibly unsettling to revisit a place after a long time. Faded details are filled in again, something isn’t quite as bright and shiny or taste as good as you remember, and subtle things have changed, all giving a disenchanting feel. One of my first trips on my year abroad was to Brussels. I had some time on my own in the city and remember turning a corner onto the narrow Rue des Bouchers and being overwhelmed by the small cafés and the sight and smell of the seafood displays. It was straight out of the travel guides or a Rick Steves special.

I returned to Brussel 14 years later. With much more experience living in Europe, traveling, and with life in general, the street seemed tacky. I knew that most locals would never eat on this street and the seafood displays aren’t as fresh as they seem. And if they are fresh they are overpriced. Typical tourist trap. I really enjoyed the second visit to Brussels – in fact more than I did my first trip. But I wish my initial naive impression of Rue des Bouchers had remained.

It was hard to get a good photograph on Rue des Bouchers. It is narrow and crowded. This was my favorite picture of the set, even though it doesn’t show my original subject – the cafés. The people seem small and the entire feel of the street is  in focus here and in the end I like that effect. I converted this to B&W as I thought the light and dark contrast added to the drama, a drama which is I felt present on this street. Further I lowered the contrast but also lowered the darks and added a slight dark vignette.