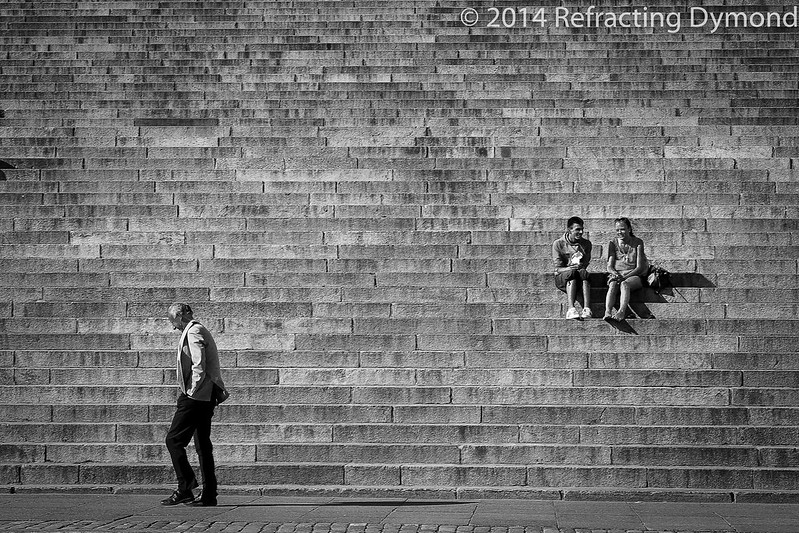 Cold, quirky, clean…Scandinavia is an amazing place. Of the Scandinavian countries, Finland stands out as a bit quirkier than the rest – you don’t have to look any further than the Finnish language to notice this. Helsinki is a small city. There are neither major skyscrapers nor the hustle and bustle of New York. But it is worth a visit to see gems like Kauppatori and Suomenlinna. The Helsinki Cathedral dominates the city skyline, raised on stairs and is white. This picture was taken at the foot of the cathedral stairs. I like the sense of solitude. Despite one of the busiest squares in Helsinki, people are still in their own world like the couple sitting on the stairs or the man taking a solitary stroll. This picture is peaceful. I like the fact that you may not be able to tell immediately that these are stairs, giving the picture a slightly unsetting feel. I also like the contrast of the smiling young couple and the peaceful old man.

I once read an interview with a professional photographer, whose advice was “always put your camera on automatic when done shooting a photo”. Thankfully, I heeded the advice and I had the camera on P mode because I did not have much time to capture this. Standing at the foot of the stairs leading up to the cathedral, I saw this picture in my mind’s eye and rushed to take the lens cap off my camera to get this shot. I wish I would have shot it a half a second earlier, as I find the man is just a bit too far to the left. I could have been exactly parallel to the stairs, but I was on a slight angle. In post processing I made the decision to make this a black and white photo. It simply seemed appropriate to add the drama. It also allows the people to blend it a bit with the stairs. The contrast is upped on this as well to increase the dramatic effect. I cropped out the very top and left side of the picture to remove evidence of the other people around.

2 thoughts on “Wall of Stairs”